Parents today appear to be on a never-ending quest for the best in baby care products, as the vast majority of global respondents in Nielsen’s online baby care survey say they are willing to switch both baby food brands and diaper brands. In both baby categories surveyed, 70% of global respondents, including more than six-in-10 in every region, say they have switched brands. Their reasons for switching baby food, however, are somewhat different than their reasons for switching diapers.

However, there are local differences in the strongest drivers of baby food brand switching. Positive word-of-mouth is particularly important in Asia-Pacific (47%), but well below the global average in all other regions. Also, in developing markets, brand switching is more likely to be driven by medical reasons. Recommendation from a health care expert tops the list of reasons for switching foods or formula brands in Africa/Middle East (37%) and Latin America (39%), and it’s the second highest reason in Asia-Pacific (37%). Africa/Middle East and Latin America also exceed the global average for switching based on a medical reason (cited by 31% and 30% of respondents, respectively).

Just as price is a critical purchase selection factor in developed markets, it is also a key brand-switching driver in these markets, particularly in North America. One-third (33%) of North American and 26% of European respondents say they switched because another brand was less expensive, compared with 18% worldwide. In addition, one-quarter of respondents in North America (25%) and just about that many in Europe (23%) say they switched because the brand was on promotion (versus 21% globally), and 19% of North American respondents switched after receiving a coupon, 10-percentage points above the global average.

PRICE IS A TOP PRIORITY FOR DIAPER-BUYERS
Like with baby food, the main reason for switching diaper brands is feedback from friends and family, cited by 35% of global respondents, but unlike the baby food category, price is a more compelling reason for diaper switching. It is the top switching driver in four of five regions (Asia-Pacific is the exception). Twenty-seven percent of global respondents say they switched diapers because the brand was less expensive (18% for baby food) or on promotion (21% for baby food). In North America in particular, it’s all about price. Forty-two percent of respondents in this region switched because another product was cheaper, and 34% did so because another brand was on promotion. In addition, 30% switched because they received a coupon (compared with 10% globally).

“Price can be a powerful motivator to encourage trial, but functionality will always outweigh price,” said Liz Buchanan, director, Global Professional Services, Nielsen. “If the less expensive product fails to deliver on basic expectations of leakage protection, gentleness, comfort and absorption, consumers will not likely buy it again.”

In addition, while many consumers will delay purchase or go to another store when their preferred diaper isn’t available, a sizeable number aren’t willing to be inconvenienced and will choose another option. Twenty-one percent of global respondents say they switched diaper brands because their regular brand was out of stock. Latin America and Africa/Middle East (28% each) both exceed the global average for switching for this reason.

Other findings from Nielsen’s Global Baby Care Report include:

The Nielsen Global Baby Care Survey was conducted Feb. 23-March 13, 2015, and polled online respondents in 60 countries who have made a baby care purchase in the past five years throughout Asia-Pacific, Europe, Latin America, the Middle East, Africa and North America. The sample has quotas based on age and sex for each country based on its Internet users and is weighted to be representative of Internet consumers. It has a margin of error of ±0.6%. This Nielsen survey is based only on the behavior of respondents with online access. Internet penetration rates vary by country. Nielsen uses a minimum reporting standard of 60% Internet penetration or an online population of 10 million for survey inclusion. The Nielsen Global Survey, which includes the Global Consumer Confidence Index, was established in 2005.
Source: Nielsen 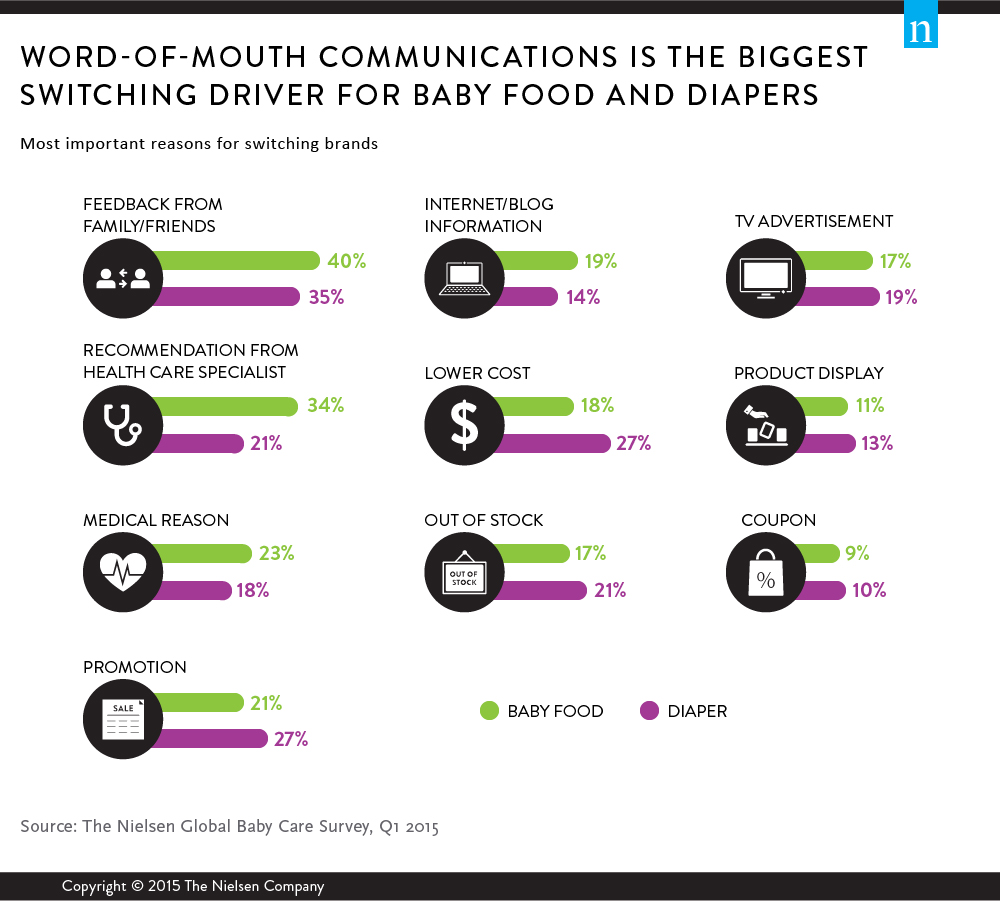