When it comes to the toy category, the experiential aspect is a critical component of developing strong customer engagement. You want to create an environment that gives kids the opportunity to poke, prod, twist, turn, ride or shake as many products as they can, because – as any parent can tell you – it’s the best way to fully engage them and discover what they like.

“Experiential marketing is crucial for brick-and-mortar stores, and the reason we have a loyal following of customers,” says Rachel Chai, Director of Merchandising – Parent Division, for U.S. Toy. “We offer a unique experience for children and families that allows them to touch and feel and explore, and accomplish this by having product displays throughout the store where the toys are readily accessible. We also offer play areas in each store so that children are given a place to express and play while parents shop.”

Play Spaces
For those retailers that have the space, creating a play area where children can explore is one of the best ways to drive toy sales, as once a child actually spends some time playing with a toy, he or she is not too willing to part with it. "When we can display toys in the play area we find that the items sell better,” says Rene Nordhus, Owner, ABC & Toy Zone, Rochester, Minn. “For example, during the past Christmas Season we sold through big ticket items like Magnatiles and Magformers because the kids played with them while in the store.”

I visited the LEGO showroom and Toys R Us store in New York City to see two best-in-class examples of such play spaces in action. The Toys R Us store in Times Square is actually a giant temporary pop-up shop that spans three floors of a building on 42nd street and Broadway. Throughout the floors of each level, the store features stations where shoppers and kids can play with different types of toys, such as racing cars, building blocks, and even a remote control car.

At the top floor, however, exploration takes on a whole new level. This is the location of the Toys R Us Play Lab – a large room in the rear of the store completely dedicated to play and exploration. Along the walls are a giant Etch-a-Sketch, LEGO station, a Nerf shooting gallery, generous floor space for racing car sets and other toys that require setup, and two long bench tables constantly packed with parents and kids testing out and discussing a variety of toys, puzzles and games in a no-rush, no pressure environment. “This is the best way to find out what my son really likes,” says one of the parents.

The LEGO store in New York’s Flatiron District also had several stations around the store that encouraged kids to build different types of creations, as well as a room with parents and kids can sit at a table and create together. What’s more, the store has a display right at the entrance on which kids’ creations are featured, along with a tag in which they fill out their name, age, and the name of their creation.

Try Me!
All is not lost if you don’t have room for a dedicated play area, however – retailers can make the aisles their “play space” by merchandising interactive toys on shelves that are easily accessible to kids and encourage engagement via packaging and promotions. Indeed, as I made my way through the aisles of my local Target and Kmart stores, I must have seen hundreds of products with a “Try Me” label, or some version of it. And the loudest, and most interactive toys were of course prominently displayed at the end caps (just like in Vegas, where they place the most active slot machines near the front to draw gamblers inside).

One endcap at Target, for example, featured the Fisher Price Think & Learn Teach 'n Tag Movi, which was promoted in the retailer’s 2017 Top Toys list. The learning robot has several buttons that, once pressed, makes the robot flash lights, talk, and move – something that would definitely attract the attention of any kid or parent in the area. Kmart did the same thing using dump bins filled with squeeze toy animals – as parents passed by the kids just couldn’t help but pick them up and squeeze the sound out of them.

When supported by creative promotions, retailers can really turn these aisles into an engaging and exploratory experience, as Walmart did past holiday season. The retailer launched a chain-wide event called, “Toys that Rock” -- a day completely dedicated to in-store play and exploration for kids. Parents were handed the retailer’s annual toy catalog upon entering the store, and kids were encouraged to roam the toy aisles and try out the new products. Whenever they found something they liked, parents marked it off in the catalog with a special sticker, so that they could purchase it later – either in-store while the kids were taking photos with Santa, or else online.

YouTube: The Virtual Play Space
One of the greatest opportunities for creating an engaging toy experience, ironically, is via social media – YouTube, in particular -- which can have the effect of turning a kid’s iPad screen into a virtual “play space.”. The search term “toys” on YouTube brings up more than 93 million results, videos that include everything from kids building LEGO projects, playing with interactive robots, to “unboxing” videos, in which parents film kids’ reactions to opening a gift.

“One major trend in the market is unboxing or what I like to call ‘the big reveal,’” says U.S. Toy’s Chai. “It’s when a child is a given a gift and they must open that gift to reveal an unknown random surprise (often a collectible) inside. Some examples of these are L.O.L. surprise dolls, Hatchimals Colleggtbiles, or blind bags/boxes.”

The beauty of these videos is that they effectively bring the toy aisle into the consumers’ home, and while viewers may not get to touch, feel and play with the toys on the screen, they see the joy and excitement of other kids doing so, and for many of today’s connected kids, that’s more than enough to get them – and their parents – into the store to experience the real thing for themselves.

RETAILERS - DISCOVER NEW AND INNOVATIVE TOY SUPPLIERS TO MAKE YOUR 'PLAY SPACE' TRULY STAND OUT -- AT ECRM'S 2018 TOY EPPS!
CLICK HERE TO REGISTERl
ABC & Toy Zone's in-store play area
Toys R Us has stations like these throughout the store
The entrance to the Toys R Us Play Lab
A parent and child checking out toys at the Toys R Us Play Lab
Nerf gun shooting gallery
The Lego Store's play area
Kids get to showcase their Lego creations on a store display
Target's toy endcaps feature interactive toys that grab attention
Kmart's endcaps also feature the most interactive toys
Hundreds of toys at Kmart, Target and Toys R Us feature a "Try Me" label
Walmart, Target and Toys R Us exclusive Hatchimals were a YouTube hit
This U.S. Toy display includes blind bags -- popular among YouTubers 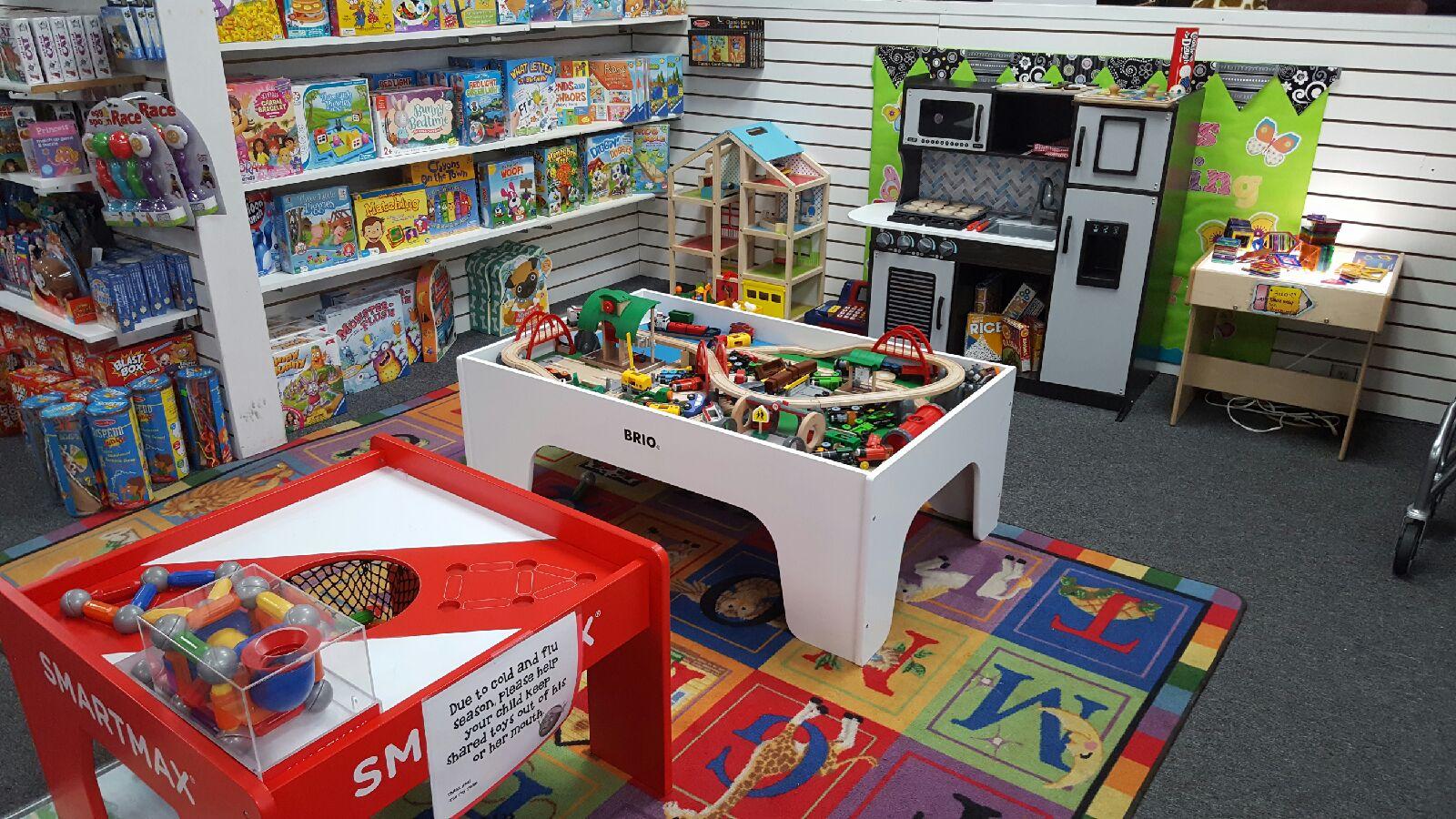 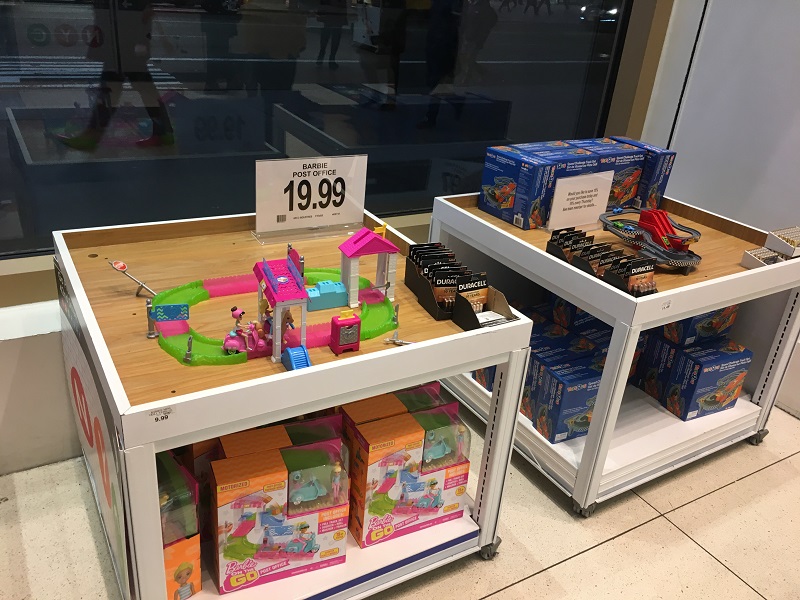 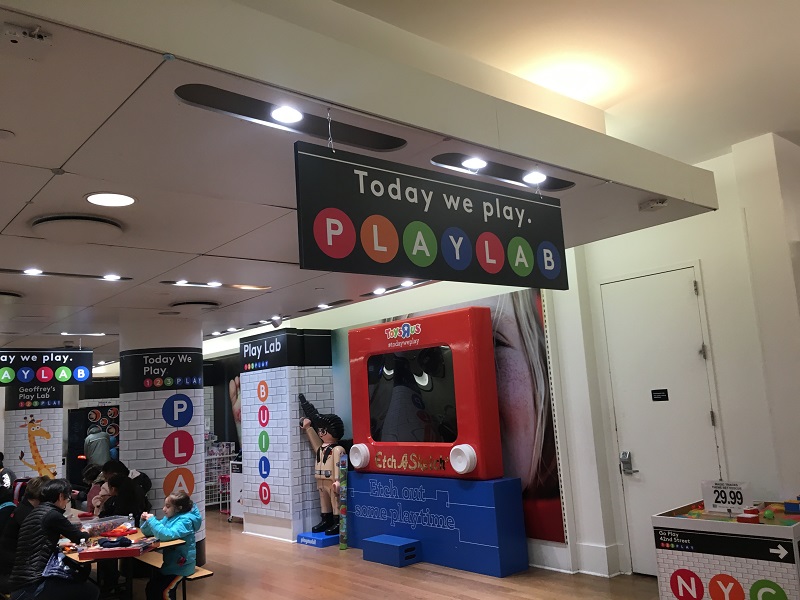 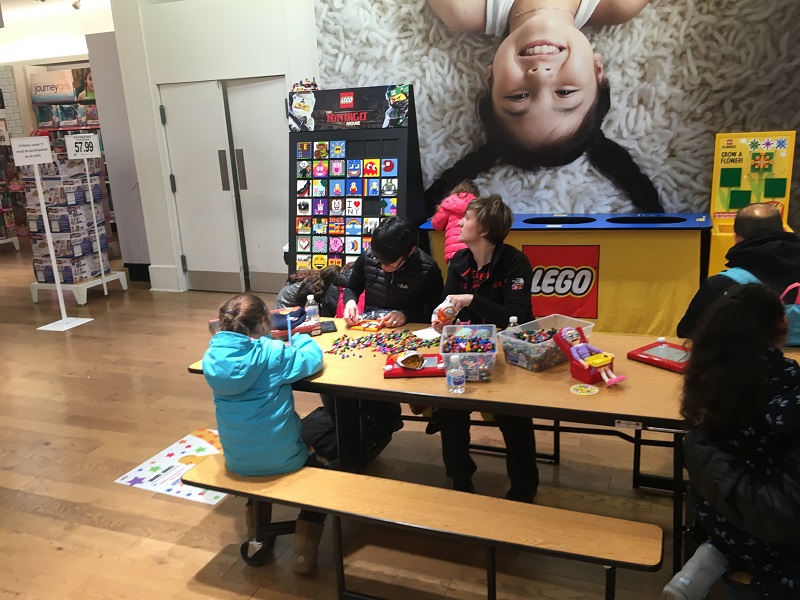 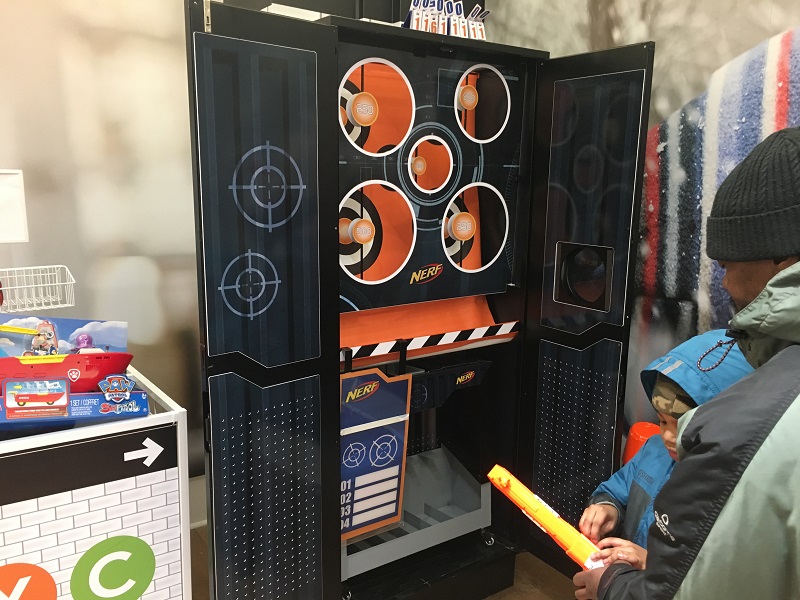 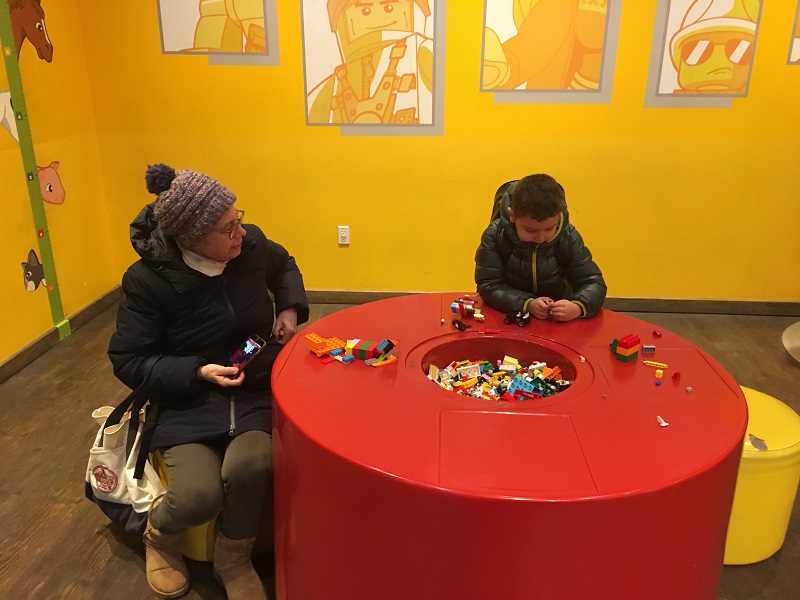 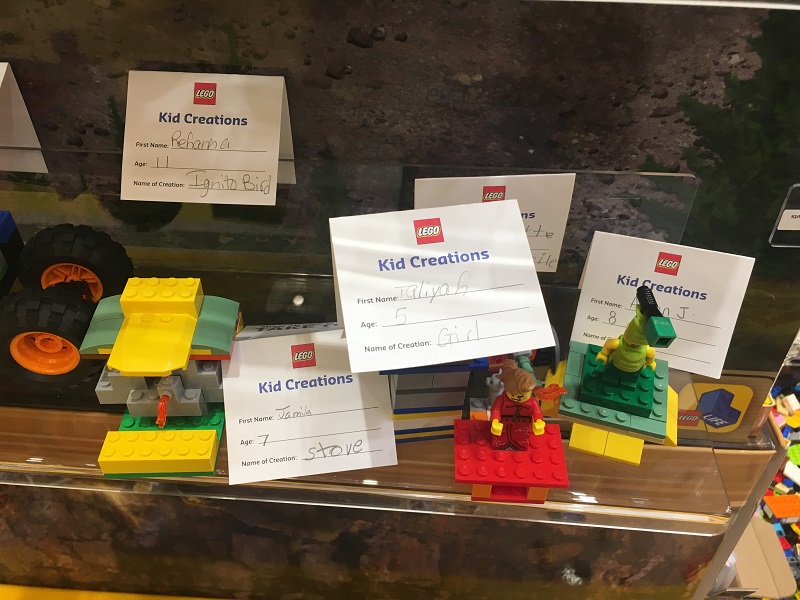 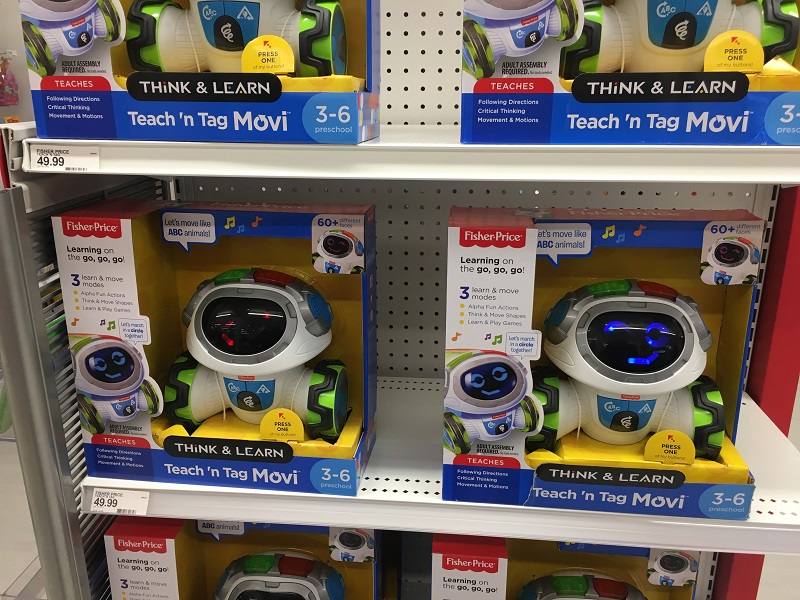 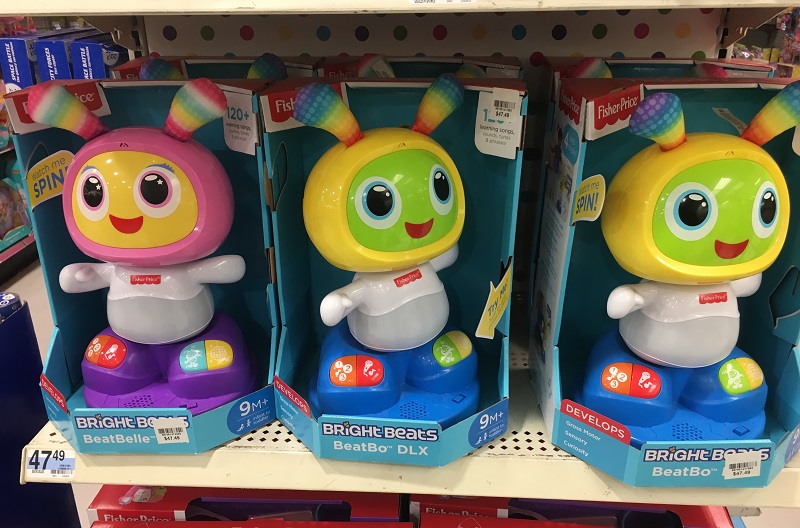 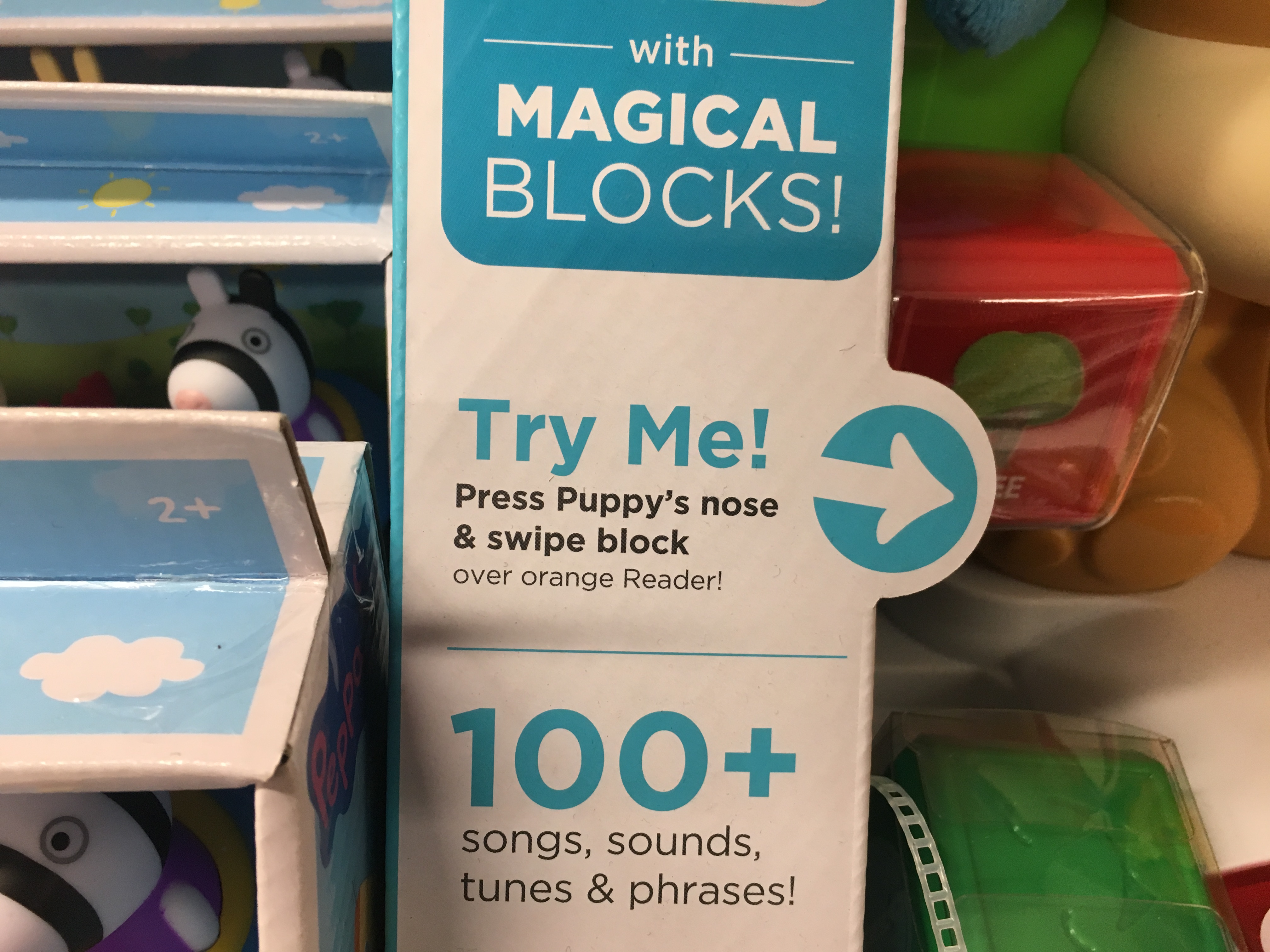 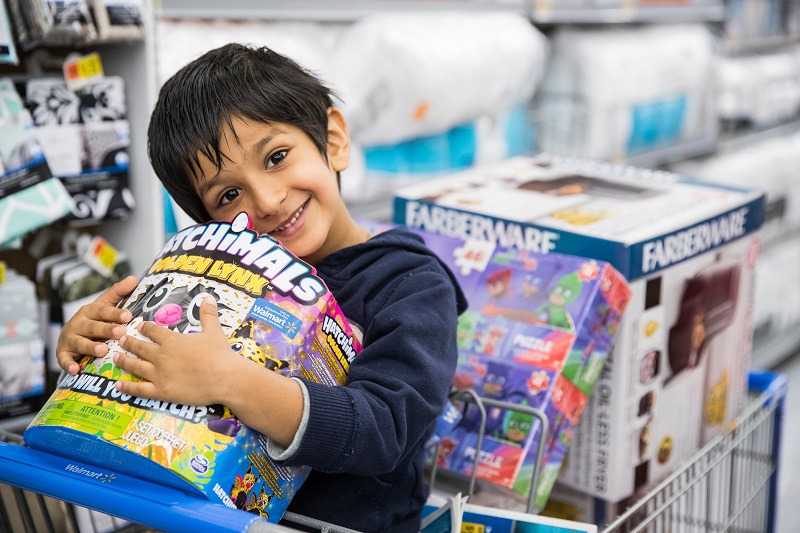 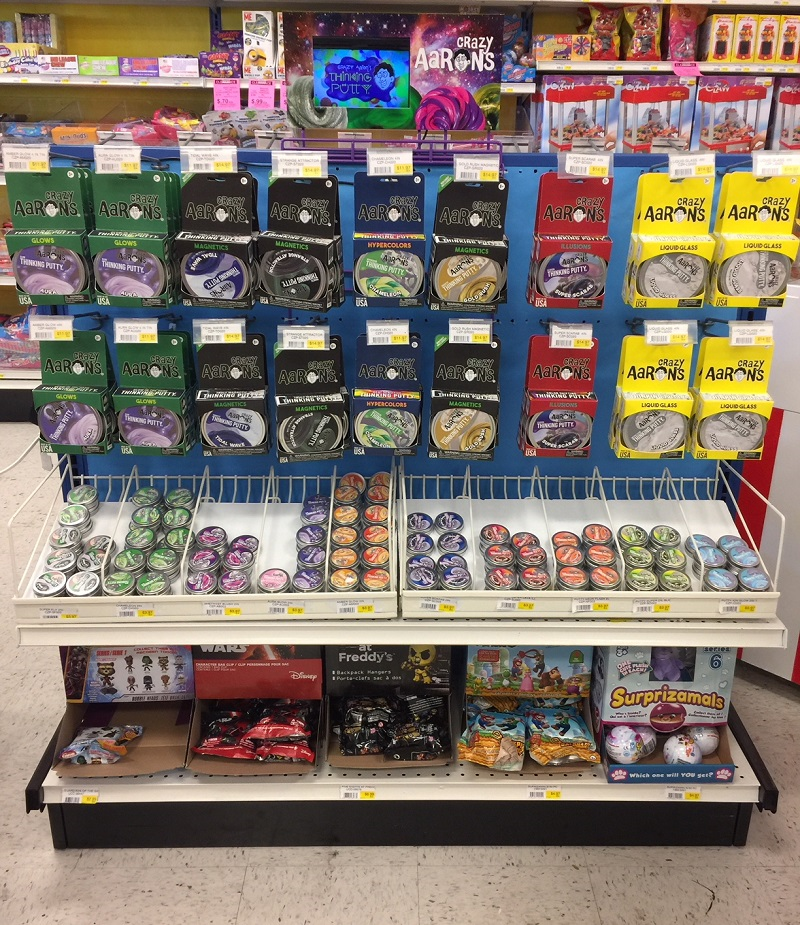