In Armando Martin’s recent article, “What is ‘American Food,’ Anyway?” he discusses how the food that we typically eat in this country is increasingly becoming a mix of ethnic specialties from around the globe. “Americans have a storied past of innovation and originality,” he wrote. “However, when it comes to food, we’re the world’s greatest at borrowing seasonings, flavors, smells, and textures, making them our own.”

And according to the U.S. retailers and international suppliers interviewed at ECRM’s recent International Foods EPPS, he’s right on point. Scan the aisles of most food retail stores today and you’ll see the influence of other countries everywhere. Some have sections and aisles dedicated to products from other countries, and many products have ingredients previously used only in international fare.

Of course, part of this results from the growing mix of multicultural consumers. According to David Mesas, Director of Sales for Geoscape, who presented at the EPPS, Asians, Blacks, Pacific Islanders and Hispanics make up more than 36 percent of the U.S. population, a percentage that is even more diverse when it comes to younger age groups. And the number is growing fast (to see just how fast, check out the demographic maps in his slide presentation).

Often within each of these multicultural groups are many subgroups, each with its own particular cuisines, such as Central American, South American, Cuban, and Puerto Rican within the Hispanic demographic. Then there is the degree of acculturation among each group, with first-generation Americans tending to eat more of the foods typical of their home country, and second- and third-generations eating more typical American fare. And that’s where the conundrum lies, because – as Armando points out – American food is increasingly becoming international food. (It brings to mind the scene in the movie Talladega Nights, when the French race car driver asks Ricky Bobby and his friends what it was that Americans gave to the world, and they answer: Chinese Food, Pizza, and Chimichangas).

Indeed, if you scan some of the posts from our previous Grocery EPPS sessions, you’ll see again and again – whether it’s in the center store or perimeter, snacks or beverages (and even candy), ethnic and exotic ingredients and flavors are in demand, and retailers and suppliers would do well to address this in their merchandising and product innovation and sourcing.

Some of the other trends mentioned by retailers and suppliers at the International Foods EPPS:

Natural, Organic & Clean Label: As we’ve seen over the past year at our other Grocery EPPS sessions, consumers’ increased interest in wellness is driving sales and innovation in natural and organic products, as well as the demand for transparency in the ingredients, sourcing and production practices of retailers and suppliers of these products.

Protein: Shoppers, particularly those on low-carb diets, are looking for more – and more flavorful -- sources of protein, and plant-based proteins are gaining popularity with the growing number of vegans and vegetarians.

Coconut: As one attendee said, “Coconut everything is popular.” Coconut and coconut oil – known for its nutritional benefits from its healthy fats – are finding their way into all types of food products.

Tahini: Some are viewing this as a competing trend over hummus, which has exploded in sales over the past few years as a healthy spread and dip.

Overall, as American consumers continue to seek more ethnic foods as well as ethnic ingredients to add a twist to their traditional American cuisine, retailers and suppliers will find many opportunities to develop innovations that can satisfy their increasingly diverse palates.

So, as international food becomes more and more the mainstream among U.S. consumers, we go back to the question posed by Armando in his column: What is “American Food,” anyway? 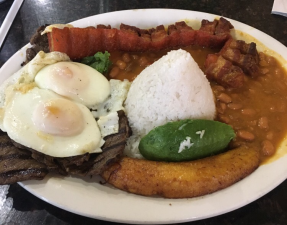