I happen to live near 23rd Street in Manhattan. Twenty-third Street is a major east-west thoroughfare, lined on both sides with a variety of retail establishments – restaurants, bars, banks, drug stores, even a Home Depot and Eataly.

About 10 years ago, a local restauranteur named Danny Meyer got bored running his fancy place on 24th Street and added a hot dog cart out front for the summer, selling delicious sausages. Over the course of about two years, this cart morphed into the original branch of The Shake Shack – located in Madison Square Park across the street. From this humble beginning, a big business was born, and now there are Shake Shacks all over the globe.

About two years later, a Chipotle opened up shop on the street. It was a welcome addition to a dining scene that was mostly dominated by traditional fast food options like McDonald’s, Dunkin Donuts and Arby’s. But in the following years, the street has come to be dominated by restaurants in the emerging “fast casual” area. Shake Shack and Chipotle were followed by Pret a Manger and Panera Bread, two other leaders in fast casual, and Schnippers, a local, quality “comfort food” place.
All of these restaurants share a price point between traditional fast food and sit-down restaurants and feature a service system which includes self-service and full-service aspects. And they all claim to deliver food which is significantly better than traditional fast food (And mostly, it is, in my opinion.).

Fast-Casual Followers
I had not really made much of this until the last few months, which have seen the opening of six additional fast casual restaurants all within a four-block strip. We now have fast casual chicken (Fields Good Chicken), sushi (Snow Fox), Mediterranean (Verts), Korean (New York Kim Chi) Greek (GRK) and Vietnamese (Bon Mi). All of these places serve a nice meal (though some are better than others, but this is not a restaurant review…), and they all adhere to the fast-casual model. You stand on line to order, your food does not arrive instantly, though it does arrive quickly. There is some limited table service, based on how crowded the restaurant is at the time you go there. And the price point is well above fast food but well below a “real” restaurant. Additionally, there is work in progress on three more places which also appear to share these traits – a crepe place, a salad place and a health-food place.

Each of these restaurants belong to small but highly aspirational chains. They range in size from a single store to 18 stores, but they are all clearly developed with expansion in mind. All of the “systems” are in place to expand and franchise these concepts. All of them have spent plenty of time thinking about logos and marketing and branding as well as making good food.
But perhaps what is most amazing is that at least four of them resemble Chipotle in very fundamental ways. First you pick the meal format – sandwich, bowl or plate, then you pick the protein – Chicken, Beef, Pork or Veggie, then you pick the additional items – veggies, sauces, condiments, etc., then you pay and then your food arrives. It is kind of scary to see Vietnamese food sold just like Mexican food and Greek food, but it seems to work.
So what does all of this mean? The heavy concentration of these places in my neighborhood may have something to do with the success of Shake Shack, or the availability of space on a busy street, but I do think this also reflects the mainstreaming of quality eating. My neighborhood is not terribly fancy. We have college students, office workers, blue collar workers and everyone else. But all of these constituencies seem to be willing to pay about 30 percent more to have a meal that is just a little better, and served in just a little bit nicer environment than typical fast food.
Perhaps this is all wishful thinking on my part, but I do think that this is evidence that all of the articles we keep reading about the emergence of food culture and the desire of typical people to eat better, healthier food does have some basis in reality. At least I hope so. 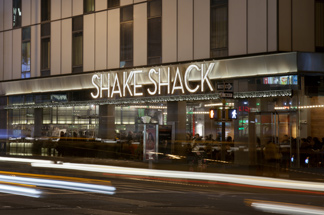