Move over Easter Bunnies, Unicorns are taking over! The mythical animals are among the hottest new trends for Easter candy, according to retailers and suppliers interviews by ECRM’s grocery team at the Candy Planning: Easter & Valentines Day EPPS held recently in Palm Beach Gardens, Fla.

While Unicorns have always been popular, the craze really took off following the Starbucks’ launch of the Unicorn Frappuccino this past April, and as we’ve seen at ECRM’s Skin, Bath, Cosmetics & Fragrance EPPS last month, the craze has invaded many product categories that involve bright colors that lend themselves to the Unicorn theme.

This is part of a larger trend in candy toward novelty items, including nostalgic candy products, and candy packaged with toys or as gifts, and was trending heavily among supplier attendees. Indeed, one of them, Candy Treasure, had this quote on its website indicative of this trend: “We believe you should play with your food. That’s why our candy isn’t just for eating, but for fun, too.”

Toys were prevalent among the suppliers offerings; CandyRific, for example, has M&M football character fans, which include a the iconic M&M characters dressed as a red football player and a yellow referee, with M&M candies packed within the handle of the fan, so consumers can cool off while enjoying them (see photo). And Galerie Candy & Gifts offers candy in dispensers shaped like the Marvel superhero characters of Spider-Man and Iron man. Of course, novelty candy offerings wouldn’t be complete without a fidget spinner, such as the Sweet Spin by Radz Brands, LLC.

Healthy options were also trending at the EPPS, including candy and chocolate made with natural and organic ingredients, as well as portion-control packaging.

Finally, as we’ve seen at our other Grocery EPPS sessions, consumers continue to seek out new and exotic flavors, whether from ethnic spices, unique flavor combinations, or just a touch of heat or sour added to the treat.

It looks like next year’s Easter and Valentines Day treats will be more colorful, more flavorful, healthier – and a lot more fun! 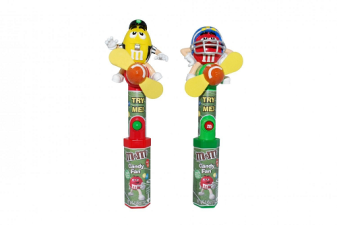