• The restaurant industry accounts for 10% of the total overall workforce
• In 1955, the restaurant industry accounted for 25% of American’s total food spending. In 2016, it is projected to hit 47%. 1 in 3 Americans first job experience was in foodservice
• A growing number of US full-service are phasing out employee tips. Some operators have raised menu prices by as much as 20% to cover the cost of compensating workers with higher base pay and percentages of each shift’s food and beverage sales. (*Hoovers 2016)
• The rise of telecommuting and online shopping have reduced the number of people looking for midday meals outside of their homes or offices. Nearly 40% of Americans work from home for at least part of the week. (NPD Group 2016)
• Gross margins for fast-food companies are typically about 55% of net sales. (Hoovers 2016)
The Numbers
• $782 Billion – US Restaurant industry sales (NRA proj 2016)
***See Figure A for restaurant industry sales projections.
• 4% of GDP - Restaurant sales
• 7 of 10 restaurants are single unit operations. (*NRA 2016)
• $10 Billion – Consumer spending on pizza delivery in the US (*statista 2016)
Industry Overview
Full-service and fast food restaurants—the two largest segments of the commercial foodservice market—account for about 77 percent of all food-away-from-home sales. *USDA
***See Figure B for a breakdown of revenue by product.
US corporate profits rose 2.8% in the third quarter of 2016 compared to the same period in 2015.
The consumer price index for food fell 0.4% in November 2016 compared to the same month in 2015.
US tourism spending for food services and drinking places increased 5.7% in the third quarter of 2016 compared to the same period in 2015. (*Hoovers 2016)
Global Snapshot
***See Figure C for a global snapshot of food service sales.
***See Figure D for revenue by source.
Trends & Opportunities
Eating Local
Per the National Restaurant Association, 68% of consumers said they are more likely to visit a restaurant that offers locally sourced food. To improve food quality and appeal to consumer tastes, consider using more locally sourced ingredients, such as produce from local growers to ensure a fresher product and better tasting meals. Buying from local suppliers also helps food service contractors appeal to customers concerned about sustainable agriculture and ecology issues. (*Hoovers 2016)
Think Global
66% of consumers eat a wider variety of ethnic cuisines now compared to just five years ago; with 80% of consumers eat at least one international cuisine per month (restaurant.org 2016). Asian and Indian fast-casual is poised to become one of the hottest up-and-coming trends in the coming years. (Mintel Menu Insights 2016) Further, global sales at Asian fast food restaurants have grown by nearly 500 percent since 1999, the fastest growth seen in any fast food category around the world (Euromonitor 2015).
Healthy Eating
70% of consumer reported ordering more healthful options than they did two years ago (NRA 2016). Recent public and federal focus on health and nutrition has put a focus on demanding better choices. For example, many public-school districts are requiring more nutritious food be served in their cafeterias. (*Hoovers 2016) However, healthful eating is still lagging:
• About three-fourths of the population has an eating pattern that is low in vegetables, fruits, dairy, and oils.
• More than half of the population is meeting or exceeding total grain and total protein foods recommendations, but, as discussed later in the chapter, are not meeting the recommendations for the subgroups within each of these food groups.
• Most Americans exceed the recommendations for added sugars, saturated fats, and sodium. *Health.gov 2015
Delivery Trends
The past few years has seen an explosions of food delivery options. Apps such a Seamless, Grubhub, Doordash, UberEats, Postmates and others allow consumers to order from almost any restaurant right from their smartphones. In a recent survey, the National Restaurant Association found that 61% of consumers would likely order delivery from a table service restaurant if offered.
***See Figure E for statista's online food delivery revenue forecast.
Technology
75% of smartphone users view restaurant menus on their smartphones while 39% of users said they would pay their restaurant of bar tab via smartphone if offered. *restaurant.org Leveraging mobile technology can greatly streamline service and provide vital customer data. Pizza is the most popular food ordered via apps and internet (72% of all ordering). (*statista 2016)
Figure A
Figure B
Figure C
Figure D
Figure E 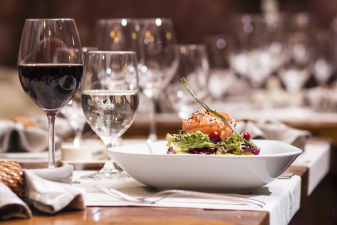 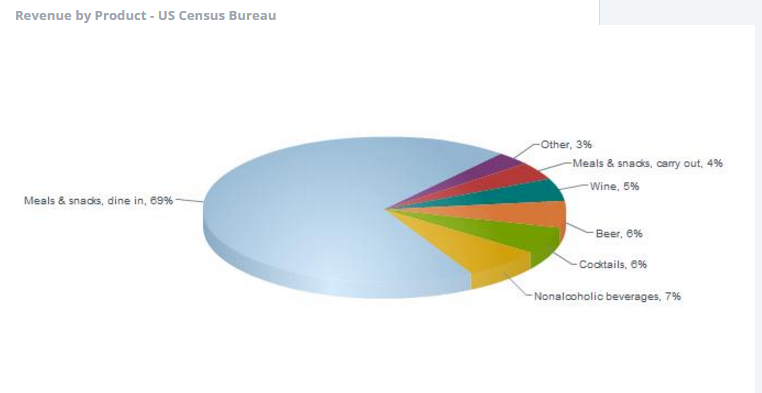 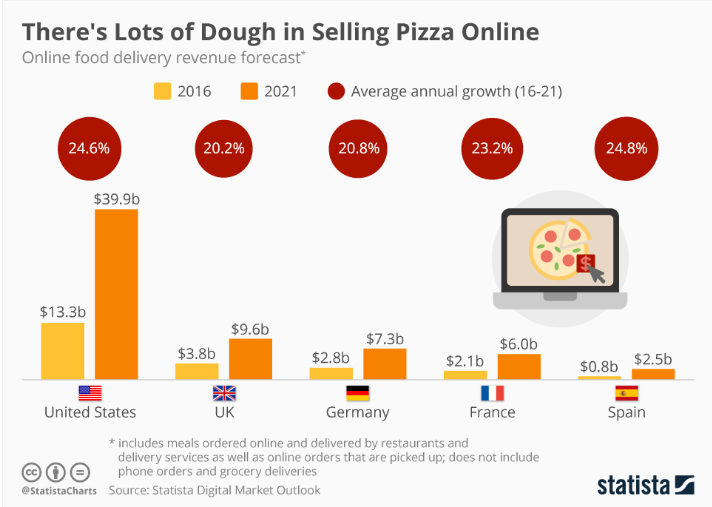