It seems as if everyone around me is now vegan or vegetarian. Several colleagues at the office have been vegetarians for a while, one of my closest friends just turned vegan – it’s getting to the point where I feel guilty every time I put a steak in my mouth (almost).

Two things are driving this growing trend among these consumers: an increased interest in healthy eating, and increased concern about where their food is coming from and the processes involved in its procurement. They want to know what they are putting in their bodies, and from where and how it’s sourced. The impact of these trends was evident in comments by retailers and suppliers interviewed at ECRM’s recent Natural, Organic & Specialty Foods EPPS.

The Need for Transparency
The demand for transparency means that consumers are increasingly looking beyond the claims of natural and focusing on the ingredient list and other details on the packaging. “The term, ‘natural,’ is coming under increasing fire legally, and its use is being questioned,” said one attendee. “Consumers want a cleaner list of ingredients, even for items like chocolate and candy, and want healthier products in general.”

To address this, many suppliers are turning to certifications to prove that their products are sustainably sourced. “The trend of consumers wanting more transparency as to where their food is coming from is growing,” Said Shaina Kandel, Business Development Manager – CPG, for Fair Trade USA, who spoke on the topic during a general session at the EPPS. “This is causing an influx and interest in certification, which signals to consumers that they are credible and have responsible sourcing practices.”

Private Label Organics
This is also leading to retailers taking the reins and developing their own lines of organic products, which has led to a boom in the amount of suppliers offering private label options. “The biggest trend at these meetings was the ability of companies to private label,” said Paul Jarrett, CEO and Co-Founder of Bulu Box, an e-commerce retailer and subscription box company (see video below). “It was something that was up front with people, and a lot of buyers were talking about it.”

One attendee noted that some categories that are flat, like cereal, are seeing growth with private label organic offerings.

Plant-based Proteins & Bugs
An additional trend – no doubt helped by the vegan crowd – is the growth of products that use plant-based proteins such as soy and other beans, nuts, chia seeds, and the like. These proteins are also finding their way into healthy snacks.

As consumers increasingly turn away from animal-based products, I predict we’ll start seeing a newer type of protein making its way into the mainstream retail arena: insects. Bulu Marketplace's Emily Crowe wrote in a recent blog post: "According to the Food and Agriculture Organization of the United Nations, edible insects contain high quality protein, fat, vitamins, fiber and amino acids that help fuel humans. Amazingly, the amount of unsaturated omega-3 and six fatty acids in mealworms is comparable to that in fish, and the protein, vitamin and mineral content in mealworms is comparable to that of both fish and meat."

The added benefit is that insects like crickets can be harvested with much less impact on the environment per gram of protein than from raising animals, so they are a much more earth-friendly option. These proteins are already making their way onto the shelves of health food stores. The only challenge is consumers’ perception of eating, well – bugs.

And while insects are technically animals in a vegan’s traditional view, the net reduction of animal suffering in harvesting insects vs. the impact of farming (farming of vegetables that vegans eat actually does have a negative incidental impact on animals, according to this Huffington Post article), is swaying some vegans to make an exception for eating them.

For me, though, I’ll stick to eating my meat, chicken and fish – I’ll just read the labels a bit more carefully! 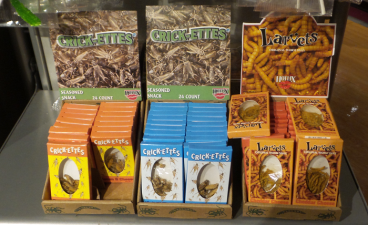