ECRM's On-Premise Adult Beverage EPPS, to be held in Cape Coral, Fla. November 6 to 8, will host a mixology sesion with nightlife and bar expert Niccole Trzaska, who has helped open and run some of the most popular bars in New York.

Trzaska will personally guide attendees through the mixing of three of the hottest drinks in the bar/restaurant scene today, and will be on hand to answer questions about the craft of developing must-have adult beverages.

Trzaska is a New York-based bar industry expert who has garnered a wealth of acclaim and a significant, loyal following for her style, personality and expertise behind the bar at some of New York’s most iconic cocktail and nightlife hotspots.

A former model who has been featured in high-profile publications such as Maxim Magazine and also the face of Nina shoes, Trzaska has turned her beauty, personality, and skills towards endearing herself with local and national press on a trade level and consumer level, featured in publications from Playboy to Marie Claire as well as the industry’s must-read Bar Business Magazine. Trzaska also at one point topped The New York Post’s “Top 25 Sexiest” list.

Trzaska’s first years in the industry began at the historic Aubar working for the legendary Howard Stein, former owner of Xenon, which was parallel to the famed Studio 54. Her undeniable skills as a mixologist where praised and fostered by industry gurus who took her around the world showcasing her liquid talents, sharing them while educating others in the cocktail and nightlife industry.

Other notable highlights for Trzaska include her work opening all of the sexy and stylish venues with the Tao/Strategic Group in their New York Nightlife department of the Dream Downtown, where she also held the keys to the most exclusive VIP room in New York City, the Electric Room. Peers, media, and VIPs alike praised her skills working “the hardest room in New York City.”

Trzaska also put her mark on the New York scene with LDV Hospitality, where she was the Director of Beverage at Number 8, a re-branding of Amy Sacco’s famous New York must-be-seen nightspot Bungalow 8, and oversaw the beverage and VIP program at The Liberty NYC, located in midtown Manhattan. 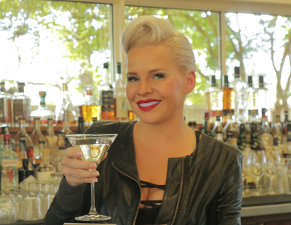