Online Grocery is Failing, Except for Amazon: TABS Analytics  9/16/2016

According to the TABS Analytics Fourth Annual Food and Beverage Study, although regular online grocery purchasing increased by half a percentage point since the 2015 study (from 3.9 percent in 2015 to 4.5 percent in 2016), it has yet to break five percent in the four years TABS has conducted this study.

“This study underscores that online grocery is failing,” said Kurt Jetta, CEO and founder of TABS Analytics. “For the fourth year in a row, consumers have turned their backs on buying groceries online no matter how much online grocery retailers try to entice them. Sixty-nine percent of consumers never buy groceries online. With only 15 percent of consumers stating loyalty to shopping for groceries online, this is not a sustainable business model, especially when you consider the industry loyalty rate benchmark is 70 percent. Food companies and grocers need to figure out why there is such a high level of dissatisfaction with the online channel before they continue to invest any further in it.”

Brick and Mortar Grocery Remains Favorite Channel
For the fourth year in a row, the grocery brick and mortar channel continued to dominate all other shopping channels with 78 percent of U.S. consumers regularly preferring to shop in brick and mortar grocery stores. The grocery shopping channel remained stable compared to 2015, Target had a four percent decrease in regular shopping trips from 29 percent in 2015 to 25 percent. Costco, Rite Aid, and BJS all registered a two percent decrease in regular shopping trips compared to 2016.

Grocery continues to lead food and beverage purchases, with a 26 percent share for consumers regularly purchasing at a specific outlet (defined as 6 or more times per year). Grocery share was nine points higher than its nearest rival, Walmart. Only Target, Dollar, Costco, and Walgreens broke the five percent share mark. Online’s share of regular purchases was up slightly but was just 1.6 percent. The online share gain was driven by an increase in the expansion of curbside pickup services (called click and collect) across the country. Even with a significant investment in that ecommerce platform, though, only 1.0 percent of Americans say they use the format regularly for grocery shopping.

Weak Promotions Equal Weak Sales
The 2016 TABS Food and Beverage Study corroborated industry trends of declining transactions in consumables. The vast majority of the directional changes in category trends are due to the decrease of heavy buyers. “TABS Analytics Fourth Annual Food and Beverage Study backs up that CPG manufacturers and retailers need to make a significant investment in promotional activity to sustain and grow their businesses. Weaker promotions is directly correlated to weaker sales trends,” said Jetta. “Sustained promotional levels of 15 percent to 20 percent of sales are needed to kick-start declining sales trends and bring heavy buyers back.”

View the on-demand webcast below. 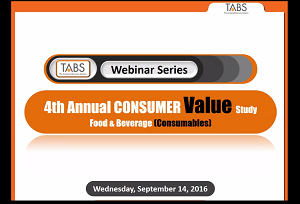