One of the bigger trends in retail over the last few years has been the rise of local, handmade, artisanal food products. What I am talking about here is not local produce and meats, as there has always been a big market for those products, but local packaged goods – local yogurt and cheese, local jam, local chocolates (and don’t even get me started on local, artisanal beer).

Some of these brands are focused on being local – as in, made right here, while others focus on being artisanal or hand-crafted, and still others focus on being natural and organic, but whatever the focus, the idea is that smaller is better. As recently as 15 years ago, very few consumers had an interest in finding hidden gems in packaged foods; all of the focus was on big companies creating big brands through big innovations. Now, however, everyone is looking to be the first to discover that special, local, unique product to either serve to friends, add to prepared dishes or just to savor around the house.

This trend was driven home to me last weekend, when my wife and I dropped into what we thought was a small farm stand, called The Chatham Berry Farm, in Chatham, N.Y. While we were in search of fresh strawberries (which we found and really enjoyed), we were stunned to also find a huge selection of packaged goods – all prepared within a few miles of the store. This included four local yogurts, dozens of local cheeses, two locally roasted coffees, local beef jerky (hot or mild), and even locally produced sauerkraut in four flavors. And the list goes on.

Just by happenstance, I started chatting with Joseph Gilbert, who turns out to own the place, and he could not have been more engaging or delightful. We even got a free tour of the greenhouses. Mr. Gilbert is a believer in local – including having as many locally made packaged products as he can find.

And this is a real threat to so-called “big food” – Kraft, Kellogg’s, Pepsi, Mars and the other 10 or so giant manufacturers that dominate the manufacture and distribution of packaged foods. It is interesting to note, in fact, that just as the interest in “little food” – the local, artisanal products discussed above – is beginning to generate significant momentum, “big food” is under attack from a variety of directions, including food bloggers, healthy eaters, nutrition advocates and others, who name them the primary driver of our society’s on-going battle with obesity and type two diabetes.

Big Food’s Reaction
So what is big food doing about the threat from little food? First of all, they are doing exactly what you would expect – defending their practices, spending lots of money on state and local lobbying, taking baby steps towards the organic and healthy trends. But beyond this, they have also all gone on significant shopping sprees, buying local, artisinal brands and using their clout and distribution networks to dramatically increase the size of the brands they acquire.

The model for this sort of behavior is what Unilever has done with Ben and Jerry’s. When Ben Cohen and Jerry Greenfield decided to make ice cream in 1977, nobody had heard of locavore or artisanal product. And Ben and Jerry themselves had no plans to make packaged ice cream, they wanted to open a local ice cream shop in Burlington, VT. But their product was a huge hit, and eventually they started selling it in many places, becoming the number two super-premium brand, after Haagen Dazs. And when Nestle, Unilever’s global rival for ice cream hegemony, purchased Haagen Dazs, Unilever needed to strike back, so they bought Ben and Jerrys, rolled it our globally, and created a blueprint for what is now happening all over the food industry.

In recent years, many others have followed in Unilever’s footsteps. General Mills bought Cascadian Farms, Kellogg’s bought Kashi and now Bear Naked. And that is just the tip of the iceberg. The big guys have basically decided to use “small food” as the proving grounds for their new product development efforts. They see what is out there in relevant categories, they follow those brands and they succeed (or fail) and then, when they think the time is right, they go to committed locavore entrepreneurs and try to turn them into rich locavore entrepreneurs.

So far, that approach seems to be working. Much of the growth which the big guys have generated over the last few years can be traced directly to growth in the local/natural/artisanal brands they have bought and nurtured. In essence, the big food has now come to understand little food and how to morph successful little food brands into real big food brands.

Whether those acquired companies really do stay the same after being acquired (which is what all of the buyers promise, but few deliver) is totally up for debate, but what is unarguable at this point is that what started out as an impulse to return to the local is rapidly turning into outsourced test-marketing for the big guys.

The real question is what happens next? In 10 years, will Kashi be just like Kellogg’s or will Kellogg’s be just like Kashi? Only time will tell, but I’d love to hear your thoughts about it in the comments section below! 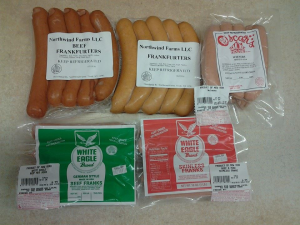