While eCommerce giants like Amazon and Jet are focusing more and more on traditional CPG products, one segment of retail hasn’t seen much online action at all – the dollar channel. David Yeom, former vice president of The Honest Company, is looking to change that with his eCommerce dollar store, Hollar.

Yeom believes that people love a good deal online, just as much as they do in-store. Discount retailers now make up a $50 billion industry competing against retailers such as Target and Walmart. Currently, only 10% of sales from dollar stores are made online.

Hollar launched in November of 2015, and in the last six months it has made an average of $1 million dollars per month, according to an article on businessinsider.com, with most of the ordering coming from its mobile app. Yeom plans on manufacturing Hollar’s own product line in the near future, with a goal of over 500 private label products to be for sale by the end of 2016. “There’s such a stigma with these companies, cheap doesn’t mean it can’t be good,” Yeom told businessinsider.com, about the quality of Hollar’s products.

Market Track was curious as to whether or not large dollar store chains like Dollar General and Family Dollar are trying to build their eCommerce presence, and promote their websites to consumers already shopping in their stores. We looked at our promotional data to see if/how the discount stores were enticing consumers to their websites.

Our research showed that neither store dedicated significant promotional messaging to drive consumers to their eCommerce platform, likely due to their huge brick and mortar presence. Family Dollar did make a brief reference to its online property in a call-out on the bottom right-hand corner of page four of its print circular, prompting people to go to their website or get discounts by sending out a text on their mobile device (see image below). Dollar General provides occasional ad messaging to drive shoppers to visit its website.

Dollar General did, however, offer two email promos over the past 30 days offering online-only promotions (including subject lines with the text “20% off Online Exclusive” and “$2 off $10 DG Digital Coupon PLUS 10% off ONLINE EXCLUSIVE”).

With its strong entry into eCommerce, Hollar seeks to grab the opportunity to establish itself an the eCommerce leader in the channel. 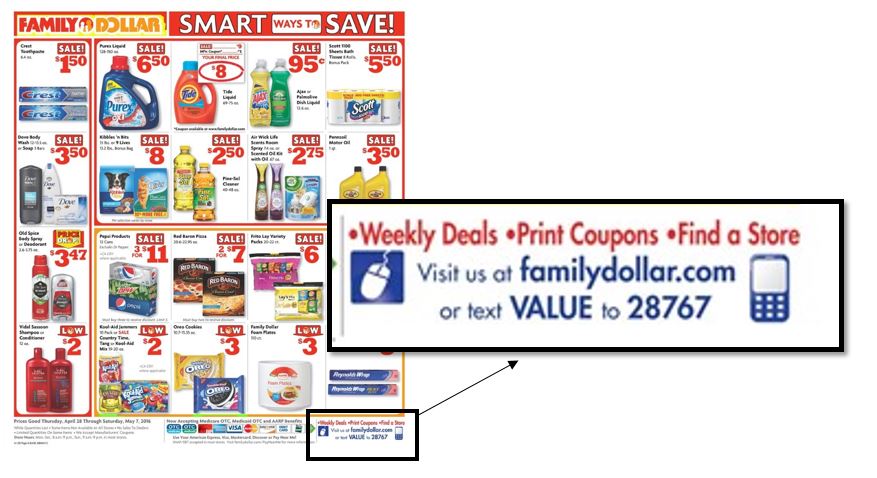