Kohl’s could be the benefactor from a recent viral video featuring one of their “Star Wars” masks. Candace Payne of Texas had just returned a shirt to the retailer because it was too big, but nobody could have predicted what happened next.

While in the store, Payne picked up a Chewbacca mask that was on sale. She then put the mask on in her car and filmed what would become a very successful viral video. The mask cries out with Chewy’s signature sound whenever the mouth is opened, and Payne is delighted by this. “Oh, I’m such happy Chewbacca!” she manages to say in between laughs. The video gained more than 136.5 million views and 3.2 million shares since it was uploaded earlier this week

The internet loves Chewbacca Mom, but so does Kohl’s. According to an article on MarketWatch, the struggling retailer posted an 87% drop in profit in the first quarter of 2016, and this video could provide a much-needed boost. In addition to giving everyone a laugh, the video reminds viewers about what Kohl’s sells and that they have a flexible return policy. Not to mention, the same mask sold out on Kohls.com from the viral traffic. Kohl’s representatives visited Payne’s house to say thank you, bringing her kids their own masks as well as $2,500 in Kohl’s gift cards and 10,000 reward points.

The unexpected viral advertisement yielded immediate exposure and results for Kohl’s, illustrating the strength of finding new, creative ways to engage with consumers (even though this instance was purely by chance).
In reviewing our promotions data, we found that Kohl’s had supported Star Wars products with more circular promotions than any other retailer over the past six months, yet they may end up seeing a more significant business impact from the viral video on its own. We can see that Kohl’s promoted the brand in just over 400 circular ads. When broken down by category, we see that action figures have a noticeable lead when compared to other merchandise branded with the Star Wars name, and found that the now-famous Chewbacca mask has not been promoted…yet. 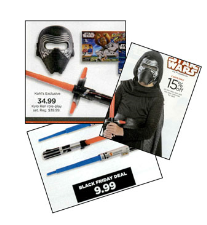