Olymel, a Canadian agri-food enterprise, won the 2015 Canadian Export Business Award in recognition of its performance on international markets in 2014. This prestigious award serves to celebrate the excellence, creativity and dynamism of a model exporting business.

Finalists of the award were ChocMod Canada of Saint-Jean-sur-Richelieu (QC) and L.B. Maple Treat Corp. of Granby (QC). All three winners are regular attendees of ECRM’s Grocery and Foodservice events.

The winners were announced on April 28, 2015 at Export Group’s major “Agri-Food Industry Networking Event” in Toronto, as part of SIAL Canada.

Based in Boucherville (QC), Olymel – which employs 10,000 people in its operations across Canada -- specializes in pork and poultry products, with the great majority of its production sold outside of Québec, including over 40 percent exported beyond Canada’s borders. Olymel’s main exports are fresh, frozen and processed Canadian pork products, sent to more than 60 nations around the world. The company mission is captured in the phrase: “Together, we feed the world.”

Over the past year, Olymel was confronted with the unexpected shutdown of the Russian market, occasioned by a 2014 embargo on all agri-food products following economic sanctions imposed by the European Union, United States, Australia and Canada. The embargo posed a major challenge to the company, which had to find new market opportunities for its pork products from existing partners. They succeeded: a remarkable accomplishment.

Olymel embarked on a quest for new outlets in international markets, notably through its sales offices in Japan, Korea and Australia, as well as with the employment of an ongoing communications strategy to various sales and import networks in other targeted countries.

Two finalists were also recognized for their exceptional accomplishments: 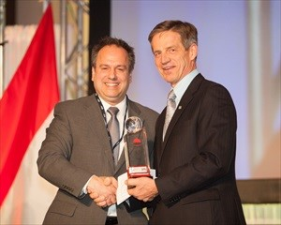 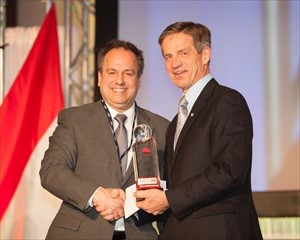